The following diagram shows the flow when using the SMART Inbound Security module to perform authorization. 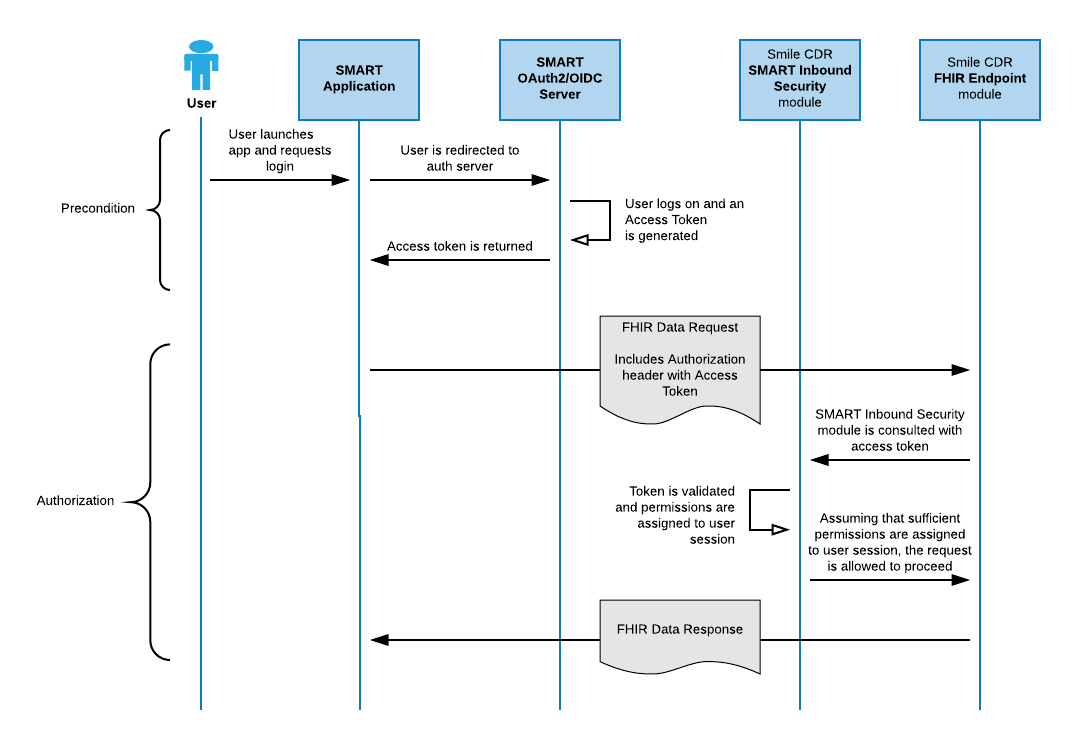 If you have a third-party OIDC provider, there are two ways you can integrate Smile CDR with the OIDC provider:

In particular, the authorization server must have the following properties:

The external Authorization Server could be a separate installation of Smile CDR using a SMART Outbound Security module but it could also be a different product such as Keycloak, MitreID Connect, IdentityServer, etc.

Setting up a SMART on FHIR architecture with an external Authorization Server requires both an inbound security module and one or more OpenID Connect server definitions.

To create a SMART Inbound Security module in the Web Admin Console:

The SMART Inbound Security module does not require much configuration, as the process of accepting a SMART Access Token is a fairly rigid process. The module has two properties for defining endpoint URLs: Token Endpoint and Authorization Endpoint.

These properties do not actually affect the behaviour of the inbound security module, but they will affect the CapabilityStatement exported by any FHIR endpoints that use the module.

In a single-node deployment, or a cluster with only one master node (see Designing A Cluster) the SMART Outbound Security module is able to act as an OpenID Connect Authentication dependency to other modules (e.g. FHIR Endpoint).

When validating an external access token (a token that was issued by a SMART on FHIR compliant Authorization Server), Smile CDR will validate the token using the standard OpenID Connect mechanisms. This involves parsing the signed JWT access token, verifying the signature, granting the user appropriate permissions, and finally applying scopes to the user session.

When accepting external tokens, Smile CDR will first validate the token to ensure that it has been digitally signed with a key that is trusted. This involves the following steps inside the SMART Inbound Security module:

See JWT Signature Algorithms for a list of supported algorithms that can be used to verify a signed token.

In order to accept tokens from an external source, a callback script should generally be supplied. This script will process the verified access token and assign the user an appropriate set of permissions based on this token (and the scopes and claims it provides).

It is important to realize that a token with a set of scopes is not enough on its own to determine what a user may do. For example, a session that has been granted Patient/*.read permission has read access to all resource types for some patient, but which patient(s) that is is not explicitly stated in the token. This is why a script is required. The script is configured in the SMART Inbound Security module configuration, and much contain an onAuthenticateSuccess(...) function that will be called immediately after the OIDC token is validated, but before it is turned into a Smile CDR session.

The following example simply assigns all permissions to the user. This might be appropriate if all users of an application should have access to all data.

The following example assumes that an external OIDC server has been configured to issue access tokens that will be consumed by the SMART Inbound Security module. In order to convey the identity of the authorized patient, the OIDC server in this example has been configured to include a claim called patient, which will include the resource ID for the Patient resource corresponding to the authenticated user.

A callback script which is able to apply the patient claim is shown below:

This definition has a few properties:

The most important property when defining the server definition is the Issuer: This is a URL which points to the base URL of the OpenID Connect Authorization Server you wish to trust. Note that the value here must point to a valid OpenID Connect server, and this server must be network accessible by the SMART Inbound Security module. The issuer URL must also match the iss (issuer) claim that is received as a part of any Access Tokens created by the Authorization Server.

Note that trailing slashes in the Issuer URL are ignored in order to avoid incompatibilities. If the Authorization Server iss claim includes a trailing slash, this will not cause any issues.

If present, the validation key is specified in JWK/JWKS format. Any tokens accepted for this server will be verified against the given key, and authentication will fail if the token can not be verified.