This page provides examples of how to configure Smile CDR for specific security designs.

This example illustrates how to set up a simple application. In this example, we're using Smile CDR's database for both resource storage as well as user storage and authentication. We will set up two users:

The following diagram illustrates this setup.

If your configuration does not already have one, first you should create a Local Inbound Security module. Configure this module with appropriate password encoding settings for your needs.

Create a FHIR Storage (Relational) module for the version of FHIR you are looking to support.

Create a FHIR Listener module for the version of FHIR you are looking to support.

The FHIR REST endpoint should be configured with HTTP Basic security enabled, and the Username/Password Authentication dependency pointed to your Inbound Security module. This is shown in the screenshot below. 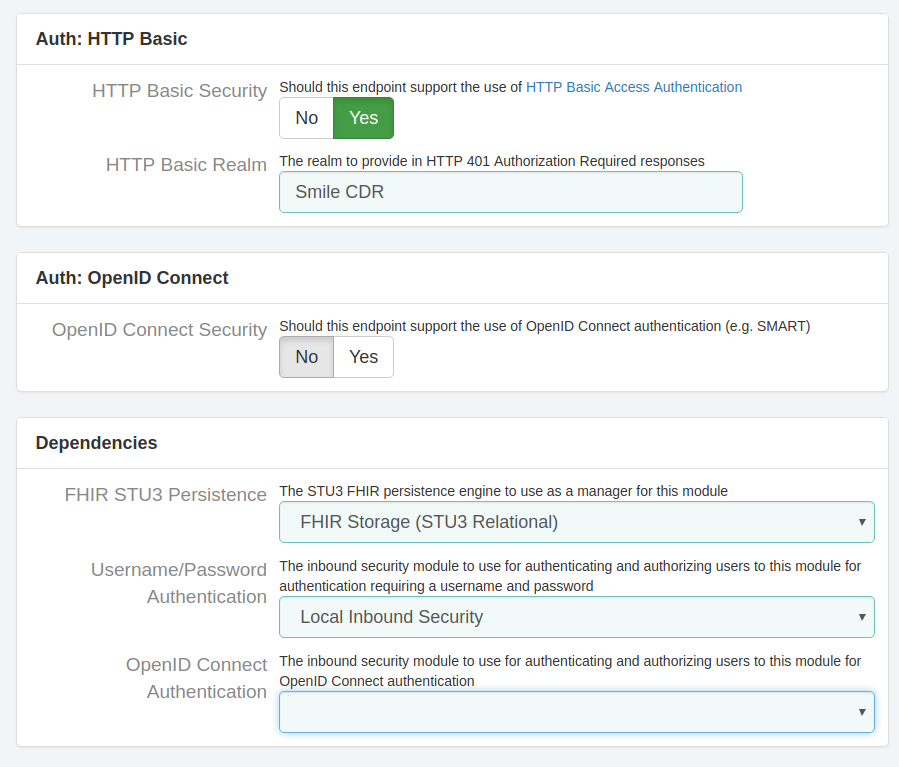 We will define permissions for an administrative user, who is allowed to perform any function on the repository. This user can create, update, and delete resources as required.

To set this up, grant the user the following permissions:

We will then define permissions for a user who is authorized to be a FHIR Client, and who can read any resource of types ValueSet and CodeSystem. Aside from that, the user can only read resources within a specific Patient compartment. This means that the user can access general administrative data (ValueSet and CodeSystem do not not typically contain sensitive data).

To set this up, grant the user the following permissions:

Now that you have a FHIR Endpoint that has been secured using HTTP Basic Authentication, you will need to add an Authorization header to your requests.

Here is an example request showing the Authorization header:

The [credentials] part above is a base64 encoded string in the format username:password. For example, the username admin and password password you would result in the following header:

The base64 command can be used to base64 encode the credentials. For example:

In this example we are authorizing data requests to Smile CDR using a 3rd-party Identifity Provider, or more specifically a 3rd-party OpenID Connect server. This might be a software package such as MitreID Connect or Keycloak, or it could be a cloud service such as Okta or Ping Identity.

The proposed architecture here is shown below:

To keep things simple, we'll refer to 3 roles in the example that follows (see SMART on FHIR Participants for more details on these roles):

The OpenID Connect protocol relies heavily on cryptographically signed assertions about the user that are included in the token(s) which are passed from system to system. A simple way of thinking about these assertions is follows:

The token, which is a signed JWT, contains a number of specific "claims", which are actually just fields within the JSON document. These fields identify the system that issued the token, metadata about the token and the session, and often details about the user.

A very simple example of a JWT follows:

When this JWT is signed for sharing, it is also base64 encoded, resulting in a string resembling the following (although the real string is generally much longer):

The OIDC protocol specifies that apps may request scopes, which are a mechanism for declaring specific permissions that the App has (in other words, they declare that the App has the ability to do specific things on the user's behalf). The SMART on FHIR specification declares a set of healthcare specific scopes, such as patient/*.read (app may read but not write any resource data about the current patient). These scopes are placed in a claim called "scope".

While scopes are used to convey App permissions, the OIDC protocol does mandate any specific mechanism for conveying User permissions. In our example here we will use additional custom claims that are used to convey the linkage between the user and the FHIR resource they are allowed to access.

Conveying the details of what the user can do is probably the least intuitive part of this flow. This is mostly because the OIDC and SMART on FHIR specs aim to cover the authorizing of Apps, but leave the authorizing of Users up to the individual implementation.

In our example, we are going to add a single custom claim to the generated token called "patient" containing the resource ID that corresponds to the logged in user. In other words, the Auth Server will include a custom claim such as "patient": "A123" and this will be interpreted by the Resource Server as an assertion by the Auth Server that the logged in user is allowed to access any data belonging to the FHIR resource Patient/A123. This might include the Patient resource itself, but also Observations, Encounters, etc. that refer to the given patient.

This type of authorization is simplistic and can be expanded upon in many ways, but it serves to demonstrate the concept of authorizing patient-facing apps to allow patient users to access their own data without granting access to other users' data.

For our example, the Auth Server is configured with the following settings. The mechanism for achieving these settings will vary from provider to provider but the general concepts should exist in every provider.

In our example here, we will use the following HS256 shared secret key. There is no requirement to use this form of signature, and you should absolutely generate your own key for any real scenarios but this key will work for testing. The format below is known as a JSON Web Key (JWK), and the value of the "k" attribute is the actual key contents.

Any OpenID Connect server needs an Issuer URL. This URL serves two purposes: First, it is used as a unique identifier to actually indicate to the Resource Server which Auth Server actually issued the token. Second, it can be used as an actual resolvable URL by the App or Resource Server to introspect the token, meaning to invoke service endpoints on the Auth Server to query for more information about the token or the server.

In our example, we will use the issuer URL of: https://identity.example.com:9200

We will need to create a definition for the client (i.e. the App) in the identity server. This definition should include the following details:

The following is an example of an Authenticaton Script.

In this script, we examine the "patient" claim, and if it exists we will grant the user full read/write permissions for any data in the given patient's "compartment" (compartments are a FHIR concept indicating resources that are deemed to "belong" to the given Patient). We will use scopes to indicate whether a given app should be allowed to read and/or write, so despite giving the user full permissions here, these rights will be reduced when a token is processed based on the approved scopes.

If you do not already have one created, you should now create a SMART Inbound Security module in your Smile CDR module configuration. Give this module an ID, and then paste the script from step 2 into the Authentication Callback Script (Text) box. No other settings are required.

In your FHIR Endpoint module you will want to:

Under Config OpenID Connect Servers you should create a server definition. This definition corresponds to your Auth Server.

Grant the server an Issuer ID of https://identity.example.com:9200 and paste the JWK (the full JSON document) from step 1 above into the text box labelled Key (Text) and then hit save.

No other settings are required.

If you are able to, you can now request a real token from your Auth Server. For the purposes of demonstration, we'll go through an example that should also work with the given configuration.

The following JSON document is a JWT claim set containing the required claims for the setup described here:

You may now invoke your FHIR endpoint using a request such as the following:

The following snippet shows the authorization script above with a few more examples of possible interactions.

Note that getClaim can be used on theContext to get any claim in the JWT, of any data type. Null will be returned, if no claim exists.